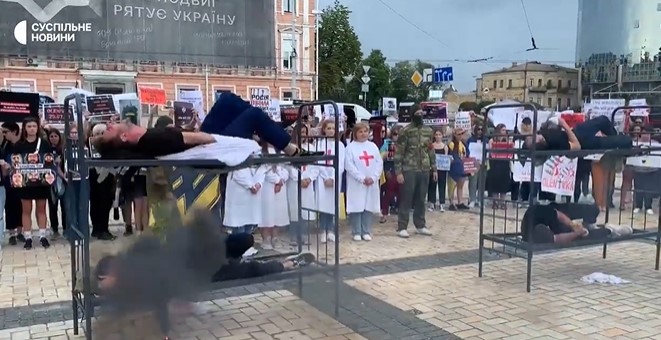 In Kyiv’s Sofia Square families of Azovstal defenders held a performance to honor the fighters, fallen as a result of the terrorist attack on Olenivka prison. Participants demanded security guarantees for Ukrainian soldiers from international organizations.

According to the Main Directorate of Intelligence of the Ministry of Defence of Ukraine, Ukrainian POWs were tortured before the mass murder in Olenivka. With these interrogations, russian occupiers tried to force Azov soldiers to be filmed in pro-russian TV reports and take the blame for the war crimes they allegedly committed.

Russia is a terrorist state, violating all possible customs and laws of war. russia must be excluded from all international organizations, as it doesn’t follow any international rules or laws.