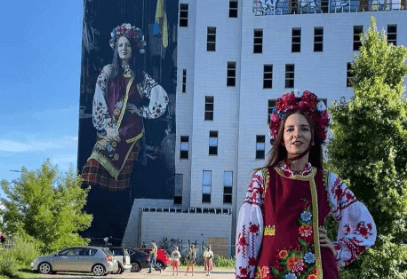 A huge mural of a Ukrainian woman in a national costume has appeared on the former Moscow House facade in Vilnius, Lithuania.

The mural depicts volunteer Tetiana Drobotia from Palyanytsya volunteer center, who helps temporarily displaced people and Ukrainian defenders in Zaporizhzhia region. Lithuanian artist Lina Šlipavičiūtė came up with the idea of the mural that has been implemented by a team of Lithuanian, Ukrainian, and Estonian artists.

Photo: The Verkhovna Rada of Ukraine